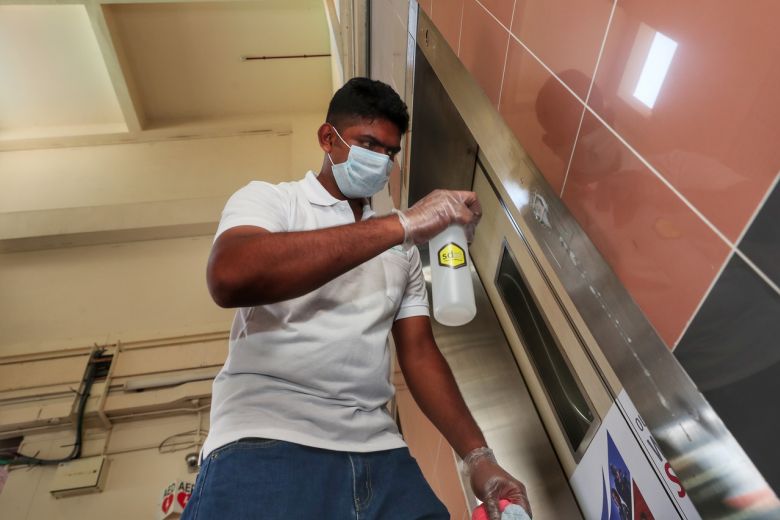 Second Round of SD Lab’s Coating to be Applied to 26,000 HDB lifts

SINGAPORE – Another round of self-disinfecting coating will be applied to 26,000 Housing Board lifts, starting from the end of the month. The first round of the coating, known as SD ST, was applied in April amid the coronavirus outbreak, and it is able to last for three months, killing bacteria, viruses and fungi upon contact. Follow-up tests that were conducted showed a low microbial count on the lift buttons after the coating was applied. The second round of coating will be applied to all 26,000 lifts across HDB estates under the 16 town councils within a month, said the Holland-Bukit Panjang Town Council on Monday (June 15).

Temasek Foundation, the philanthropic arm of Singapore state investment firm Temasek, said that it donated 652 litres of SD ST to support the town councils’ second round of self-disinfecting coating for all HDB lifts. It added that both adenosine triphosphate and microbial swab tests have been conducted for various HDB lifts across the island over the last two months, and the test results showed low microbial count for the lift buttons after the coating was applied. But Temasek Foundation said that the coating’s efficacy “is still subject to a regular cleaning regime and care of the coating”. It will be embarking on a second round of testing after the disinfection coating has been applied, to continue testing for the coating’s efficacy.

Dr Teo Ho Pin, the town council’s chairman and coordinating chairman of the 15 People’s Action Party town councils, said: “During this unprecedented period, we are touched by the many organisations that extend their kindness and generosity to the community.

“I wish to thank Temasek Foundation for their contributions in making our built environment a safer place.”

Holland-Bukit Panjang Town Council also thanked residents who helped to sustain the effectiveness of the coating through good personal hygiene and proper lift use. Dr Teo had earlier warned lift users to avoid pressing lift buttons with hard objects, such as keys, as this could scrape the coating off. He added that lift users “should not be complacent and must exercise stringent personal hygiene” and ensure that they continue to wash their hands frequently.

The first round of coating was applied to all 1.5 million lift buttons in 26,000 HDB lifts, as a large proportion of Singapore’s population – around 3.2 million people – live in HDB flats, and the lift buttons are one of the most frequently touched components. The coating was applied following a donation of 650 litres of sdst by Changi Foundation, the philanthropic arm of the Changi Airport Group.

The Aljunied-Hougang Town Council said that it has applied the coating to all HDB lift buttons in their town, and it has scheduled to reapply the next coating from early next month.

Frequently touched surfaces in Changi Airport, such as lift buttons, touch screens and trolley handles were applied with the coating since February. Similar anti-microbial coatings have also been applied on the buttons of ATMs.

The National Environment Agency said in an earlier statement in May that it had requested but not yet received “robust scientific evidence” on the effectiveness of such coatings against coronaviruses from the suppliers of such products.