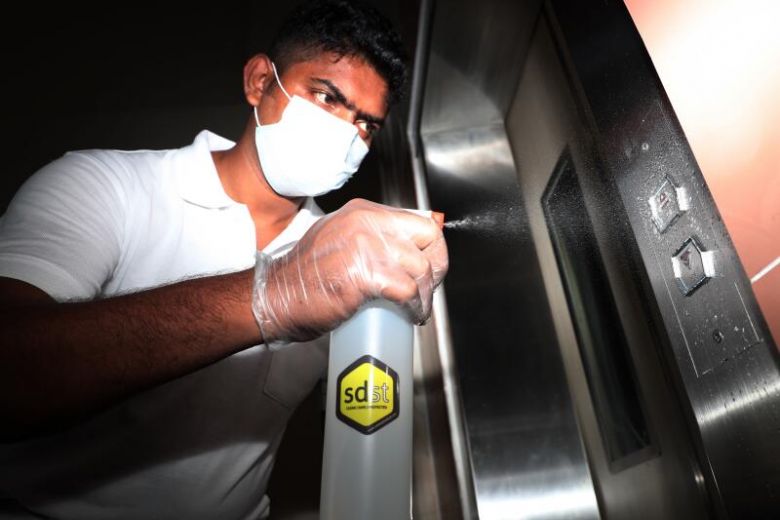 Residents in Housing Board flats who have been using their keys or other objects to prod lift buttons during the coronavirus outbreak can now set their minds at ease, as a self-disinfecting coating that lasts for three months has been applied to buttons in all HDB lifts as well as lift lobbies in Singapore.

The coating, called sdst, kills bacteria, viruses and fungi upon contact and remains in place even with repeated scrubbing and cleaning, as chemical bonding agents help it to adhere tightly to surfaces at a molecular level. It is sprayed on surfaces in liquid form like regular disinfectants and is safe on human skin.

Teams from Singapore’s 16 town councils applied the coating in lifts over the past two weeks following a donation of 650 litres of sdst by the Changi Airport Group’s (CAG) philanthropic arm Changi Foundation. This amount was found to be sufficient to coat all 1.5 million lift buttons in Singapore’s 26,000 HDB lifts.

Dr Teo Ho Pin, coordinating chairman of the 15 People’s Action Party town councils, noted on Thursday (April 2) that a large proportion of Singapore’s population – around 3.2 million – lives in HDB flats, and that lift buttons are one of the most frequently touched components in housing estates. Asked if there are plans to roll out the coating to other public areas, Dr Teo said: “We know that residents have been very concerned and we are focusing on high-risk surfaces such as lift buttons for a start. So let’s see how effective this solution is.”

Now that the coating is in place, he added, residents should avoid continuing to press lift buttons with hard objects like keys, as this could scrape the coating off. Sdst is manufactured in the United States. CAG has been using the coating for frequently touched surfaces in Changi Airport such as lift buttons, touch screens and trolley handles since February.

“One of the challenges that our cleaning partners and staff face is that you can step up training and increase the frequency (of cleaning), but there’s always an exposure time between cleaning when someone can come in and contaminate the surface,” said CAG airport operations management managing director Jayson Goh.

“So the good thing about this coating is that it creates a protective shield over the surface, and this was something that we wanted to extend nationwide with the help of the town councils.”