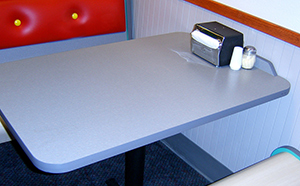 It’s often said that Americans have a love affair with restaurants: Over 70 billion restaurant meals are served each year in the United States, and more than 47% of every dollar spent on food is spent in the country’s restaurants, delis, cafeterias and catering halls.

On any given day four in ten Americans will eat at least one meal in a foodservice establishment. Unfortunately, for too many of those restaurant customers, eating out can get them more than just a meal: the Center for Disease Control estimates that annual foodborne illnesses can be as high as 48 million. While that figure is based on projections of unreported illness, hard data from the CDC points to over 1,000 annual outbreaks of foodborne illness in recent years. Foodborne illnesses such as salmonella, E. coli, norovirus, listeria and shigella can occur in the cleanest restaurant or foodservice establishment.

One of the most common forms of transmission in foodservice settings is through contaminated contact surfaces. As a recent exposé by ABC illustrated, microbes are often transferred from contact surfaces in the dining areas by guests who had previously sat in the same seats.

"Tabletops, bars, seats, menus, and salt and pepper shakers have been shown to have some of the highest microbial colony counts in the restaurant. "

By using our SD VO EPA registered and NSF approved disinfectant to kill a vast array of pathogens on a daily basis, in concert with regular cleaning and the application of SD ST or SD Pro to continually kill harmful pathogens, foodservice facility owners  and operators can improve the overall environment in their facilities, save costs and proactively reduce toxic chemical use.

SD Labs approach is to proactively control the proliferation of harmful pathogens and molds on non-direct food contact surfaces and touchpoints within foodservice environments. Our long-lasting surface coating technologies provide a cost-effective solution that is colorless, odorless and durable. Large areas can be treated quickly and efficiently to minimize disruption to facilities of this type. SD ST and SD Pro work continuously  to kill and reduce the counts of viruses,  bacteria, mold and fungi which can cause sickness degradation of surfaces.